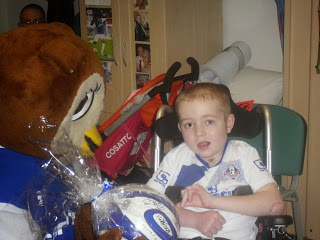 On a quiet Saturday morning in September 2011, my son Adam was waiting excitedly for his Granddad to collect him for a trip to the caravan. He wanted to pick something up from the local shop to take with him on the journey – an off the cuff decision – something which changed the course of our family’s lives forever.

At about 9.30am he pressed the button at a set of traffic lights near our home, looked both ways and – having decided the way was clear – rushed across the road.

He was wearing his brightly coloured footie kit and had crossed that road many times before and thought he’d played it safe.

What Adam didn’t know was that, just out of view, a car was approaching him and would collide with him. At age 8 ½ his life was changed forever.

The ambulance crew that visited the scene gave him a coma score of three – one of the lowest scores that can be given – before transferring him to hospital in a critical condition.

The image of seeing him there for the first time will never leave me. Clothes cut away from him, open wounds that hadn’t been stitched, tubes protruding from him and the sound of the ventilator. His face was almost unrecognisable, even to me.

The first scan results confirmed our worst fears. He had suffered multiple fractures to his skull, had bone fractures across his medial orbits and sinuses, a generalised cerebral oedema and a parenchymal haemorrhage in his frontal lobe. This was the reality facing my oldest child and only son. Many parents reading this won’t know what those medical terms mean, and I can only hope that they never have to learn.

Adam was taken to theatre for a tracheotomy and gastrostomy, and had intracranial pressure monitoring bolts put in place to measure the pressure inside his head and an external ventricular drain to help relive the increased pressure.

The next 72 hours were the worst we have ever had to face as a family. He was transferred to a specialist intensive care unit where we again waited for Adam to give us any sign of hope. Doctors prepared us for the worst and said that even if Adam did survive, the chances were that the brain injury was so severe that he wouldn”t be able to lead a full life.

December came and we saw small signs of progress. He started to emerge from the coma state and step by step we started to help Adam to slowly rebuild his life.

Our entire life was turned upside down. Acquired brain injury affects families like a stone thrown into a pond – that initial hard impact, followed by ever-increasing ripples. I moved into the hospital to be closer to Adam but that left his Daddy and our six month old daughter at home. Daddy of course came up every day, but it was desperately hard, and the effects took their toll..

My daughter too, despite being less than a year old when this first began, has not escaped the after-effects of brain injury. Some of our little girl’s most important milestones are all forever linked to that traumatic time. She took her first steps in the hospital, ‘Adam’ was her first word and even her earliest memories are of machines, and tubes, and Mummy not being at home.

As time went on, we watched the tubes being removed, procedures taking place and came to understand enough medical terms to last a lifetime.

Finally, the news came that we could start to plan to bring our boy home. His first visit took place on Boxing Day – the best Christmas gift our family could ever hope to receive. Words can’t explain how happy I was to have my family all together to celebrate Adam’s little sister’s first Christmas.

Adam finally left hospital in March 2012 with a gastrostomy feed and fully confined to a wheelchair. But the little boy who went walking to the local shop didn’t come back to us. Adam’s speech has been taken from him and while I long every day to hear ‘Mummy’ or ‘I love you’ or ‘I’m happy’ come from his lips, his smiles still tell me everything I need to know. Just as they always did

Once we got home, we wanted to find something positive to focus on – a way to give something back to everyone who’d supported us during Adam’s journey.

We called our idea “Adam’s Wish” and set about raising over £5,000 for the intensive care unit that had taken such good care of him. We also gathered 549 toys for the hospital’s Christmas appeal.

Perhaps it was karma, but shortly before Christmas Adam was chosen to go on a life changing holiday with Destination Florida. The week he spent there has undoubtedly changed him forever; he returned to us filled with new confidence and laughter having made life-long friends. We went on to raise £5,000 for the initiative so that other children with brain injuries can benefit too.

As a family we had been working tirelessly since his discharge to get Adam access to the therapy, support and schooling he needed to rebuild his life. It was exhausting but knowing that organisations like Destination Florida and the Child Brain Injury Trust were there was a source of comfort.

We were also being supported by Thompsons Solicitors through a challenging legal case to secure the funds we needed to get Adam the best possible care. As a family, we were angry about what had happened to our little boy so our fundraising efforts gave us something positive to focus on.

We also concentrated our energy on rebuilding our family life, and Adam is now the proud big brother to not one but two little sisters.

We haven’t reached the end of the road yet and Adam’s recovery is still on going. He’s learning to walk again but is likely to always rely on a wheel chair and his speech hasn’t returned but to us, he is a miracle.

Now we’re all looking to the future. Adam has started back at mainstream primary school and we’re working on gathering the resources we need to give Adam the best possible future.

Today, we’re a family who has found hope again. It’s something that Adam has taught us – hope that things can get better, despite all of the odds being against you. He is an inspiration to me, a reminder that when you think nothing can heal the wounds or stop the hurt; you’ve got to keep fighting and start to live life.

Adam was 8 ½ when he was knocked down, but he didn’t give up and neither will we. I hope that sharing Adam’s story will help drive the point home. We’d taught him the rules of the road and while not a day goes by that I don’t wish he’d waited for that green man – how many of us can say we’ve never nipped over the road when we thought the way was clear?

He was wearing bright clothing. He’d looked out for traffic. But a driver took away Adam’s chance of safely crossing the road and their own chances of being able to stop in time.

Drivers, stick to the speed limit and watch out for children. Don’t assume they’ll use the roads in the same way an adult would. We need to protect them, both as parents and drivers because as they are children they can sometimes make little mistakes with huge consequences. Always approach child pedestrians with extra caution.

Make sure your children are as visible as possible when they’re using the road – the Child Brain Injury Trust and Thompsons are giving away high visibility slap wraps at schools throughout the country so make sure your child wears theirs. Make sure they’re seen, not hurt.