Harry is 17 years old now. He was diagnosed with autism and sensory processing disorder at age 4, and has been in an independent specialist school since the age of 11.

In late May 2018 Harry started feeling poorly and came down with a cold. After a week he was worse so we took him to the Dr. He was diagnosed with tonsillitis and given antibiotics. A week later he was worse still so we took him back to the Dr after a phone consultation with them. He was sent for blood tests. That evening he collapsed at home so we rushed him to A&E. The Drs there said he had post illness fatigue and he would recover in a week or so. Sadly this wasn’t the case. He got progressively worse and it culminated in him being rushed into hospital again three days later. He was barely conscious and having seizures. He was given a CT scan and it was found that he had three masses on his brain. The Drs at our local hospital weren’t sure what they were, but we were told his prognosis wasn’t good at all.

He was taken by intensive care ambulance to Addenbrookes hospital in Cambridge where he was in surgery for 8 hours to remove the masses. They turned out to be two large abscesses and a subdural empyema. Two were successfully removed but the other was too close to the brain stem, so this needed to be treated with antibiotics. Harry was in a coma for four days, then was gradually woken up. An MRI scan a week later showed that the abscess at the front of his head was returning so he was taken back into surgery to drain it. We started looking forward again for about three days, then his kidneys began to fail. He was rushed to Nottingham children’s hospital for surgery again as the Drs thought he may have to have dialysis. Thankfully this wasn’t needed. Moved back to Addenbrookes for another two weeks before we came back to our local hospital in Peterborough for another month.

Harry had to learn to walk, talk, eat and drink again.

In February 2019 he had a titanium plate fitted in his skull to replace the infected bone that was removed. He has a cracking scar which he calls his super scar! He has been left with a pronounced right sided weakness, and his left leg turns in. He also has epilepsy now, which is mostly controlled by medication. He also can’t regulate his own body temperature, so we have to keep a close eye on him when he gets poorly.

Harry went back to school in September 2018 on a part time basis, and was back in full time in January 2019. We are very lucky that he is in a specialist school with an EHCP in place, so we didn’t have to fight for that. We, together with the school, completely rewrote his EHCP to include his new medical needs. His school have been amazing. Supporting us as a family and helping where they can. Harry is now 10 years behind his peers developmentally and academically. We were recently told by his neurologist that this is Harry now, and no more progress will be made in his healing.

We are now on the the path to transition to adult life after school. It’s a very daunting time but we have lots of help from school, and the children’s disability team are involved in helping us look for a college for him to help build his independence as much as possible, and gain some work skills and qualifications. Harry is most of the time back to his cheeky funny self. He never fails to make us laugh! He loves trains and preschool cartoons such as fireman Sam. He loves going away on holidays and being at the seaside. 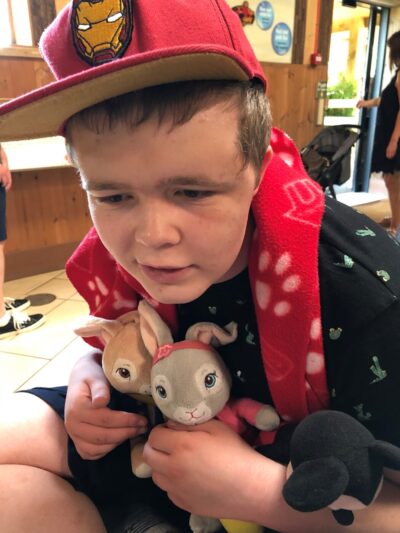 Harry is our forever little boy. As his parents we do grieve for the son we lost, and what he could have been. We thank our lucky stars every day that he is still here and he is happy. We want the best we can possibly get for him, so that he is happy and looked after and feels safe. The Child Brain Injury trust have been very helpful. From the early days right through until now. I know I can count on them if we need any help or support or information about the next steps along this pathway, and I won’t hesitate to get in touch with them if we need anything.

My advice to others at the start of their journey is don’t give up hope! Things do get better, albeit slowly, but I promise things get easier to deal with and it won’t always be such a dark time.