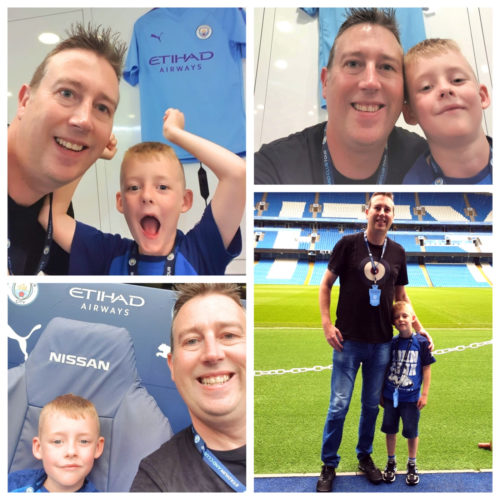 In early 2019 Maria, our ABI Coordinator for the North West of England received a new referral for a family. Noah had been receiving treatment for a brain tumour. Noah had just turned 5 and three days later he collapsed at school. That evening he was transferred from Whiston ICU to Alder Hey where the family received his diagnosis. The School (St Theresa’s Catholic Primary) were amazing responding to his collapse and have been ever since.

Thankfully the treatment had gone well, but as a result, Noah was left with some additional cognitive support needs. A psychologist who supports patients in the oncology ward referred the family to Maria.

Maria visited the family in March and has been in contact with Donna and Noah ever since, Donna has been very proactive in accessing all the resources and support available for Noah, such as our online e-learning sessions, as Donna explains;

“I just wanted to say how informative and beneficial to me that your webinar was yesterday.  I was referred to Maria by Alder Hey last week and she was so helpful and told me about this session and provided me with many resources to look at.  I was a bit reluctant /nervous/afraid but I registered for the seminar and I am so pleased that I did.  It was clear and easy to follow and put a lot of things into context for me.

My 5 year old son had a large brain tumour removed from his right frontal lobe 6 months ago and we are just coming to terms with the impact that this has caused. If I had a pen I could almost have used your slides as a tick box to some of our experiences of late.  It’s helped me accept that my son does actually have a brain injury as a consequence of the tumour but there are many strategies and support that we can utilise”

Since then Donna and Noah have come along to some of our fantastic family events. Earlier this summer Noah and his Uncle Duncan took part in a football stadium tour at Manchester City Football Club. Noah adores his Uncle Duncan and he wanted him to take him to the Man City stadium tour as they are both football fans. Maria plans a selection of events each year, usually including something with a football theme to appeal to all the football fans out there.

“Noah and Duncan had a fabulous day yesterday. The organisation and opportunity was fabulous. Noah is now a City convert and has 2 favourite City players, as he sat in their places in the changing rooms”

More recently Donna and Noah came along to a family fun day at a local Alpaca Farm, featuring an Alpaca Grand National (you heard it here first) and a picnic lunch.

Maria explains that Donna, like many other parents we see, has had to become an advocate on behalf of Noah and has been able to secure additional support from other agencies to ensure the best outcome for Noah.

“Maria has been amazing from the time we met in March. Through her contacts and subtle pushing I applied for Disability Living Allowance (DLA) and got it. I never would have done that. This has made a massive difference to us, as I am a single parent. It enables me to do things with Noah to aid his recovery but give him fun times as well. I also had support as I went through the Education Health Care Plan (EHCP) process and now have an agreed plan. The Council have done a home safety report and we are having external gates fitted to the garden plus locks on the upstairs windows, to restrict how far they open.

Whilst the help has also come from other agencies, in particular Maria’s contact Sara Dolan at the St Helens Parent Carers Group, I wouldn’t have known about these local agencies without the help of the Child Brain Injury Trust. The support from them working together for children, including Noah, is invaluable. The family days out have just been extra special bonuses and the opportunity to meet other parents in similar situations.”