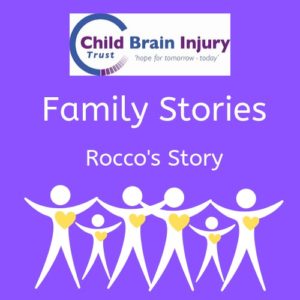 In April 2018 the Smith family were involved in a Road Traffic Collision while on holiday in Europe. While most of the family escaped with minor injuries, unfortunately their son Rocco was seriously injured.

Rocco was taken to the local hospital where they saved his life. When stable enough, he was airlifted to Royal Manchester Children’s Hospital for further treatment and rehabilitation.

Rocco spent some time in Paediatric Intensive Care Unit (PICU). I met the family when he was transferred to the ward. He was not fully conscious and had a tracheostomy to help him breathe, an IV line and a feeding tube. He was not able to sit up or communicate.

During the 5 months Rocco spent in Royal Manchester Children’s Hospital I met with the family on a regular basis. I provided the family with resources from the Child Brain Injury Trust and successfully applied for an iPad grant for him. The speech and Language therapists used this to help improve his communication skills.

When Rocco was discharged from Hospital, he still had his Tracheostomy in place but he was walking and talking (although talking was limited by the tracheostomy), which considering his injury was amazing to see!

I visited the family at home twice to provide support, advice and information as the transition to home was difficult for Rocco. He struggled with managing his behaviours and became increasingly bored and frustrated.

Rocco had his Tracheostomy removed in October 2018. This was a big relief to the whole family as it meant he would no longer require regular home visits from community nurses and he would be able to return to his mainstream school, which he was really keen to do.

He returned to school on a phased return, increasing the hours slowly so he could manage.

In July the ABI nurse and I presented the CBIT ABI awareness session to Rocco’s new teachers in preparation for his transition from the Infants school to the junior school in September. This session went really well and the teachers, who had not taught Rocco before, were very keen to make adaptations and support him into Juniors.

During the summer holidays Rocco, his brother and Dad attended a football themed family day planned by the North West ABI Coordinators. It was brilliant to see Rocco and just how much progress he has made since being discharged from hospital and having the tracheostomy removed. He did brilliantly; walking, talking, listening and following instructions throughout the day. The event gave the family the opportunity to catch up with other families who they met while in Royal Manchester Children’s Hospital.